Fox Panel Takes On Colin Powell: ‘Why Would You Consistently Call Yourself A Republican?’
video

Fox Panel Takes On Colin Powell: ‘Why Would You Consistently Call Yourself A Republican?’ 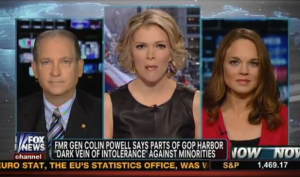 Former Secretary of State Colin Powell leveled sharp criticism at the Republican Party on Meet the Press yesterday — and, unsurprisingly, the reaction has been mixed. Megyn Kelly‘s panel tackled Powell’s remarks on Monday afternoon, offering a snapshot of that reaction.

Asserting that the GOP has a “dark vein of intolerance,” Powell, on Sunday, said the party “still looks down on minorities.” The party “needs to take a very hard look at itself and understand that the country has changed,” he said.

During the interview, Powell noted that he is still a Republican — “but whoa,” Kelly remarked, “with friends like that, within the Republican Party, who needs enemies?” She then asked for her guests’ take on Powell’s harsh words.

“I reject it,” responded Brad Blakeman, former deputy assistant to President George W. Bush. “If our party was like that, why would you consistently call yourself a Republican?” And furthermore, “what have you done to change it?” Blakeman noted that Powell hasn’t run for office, didn’t speak at the convention, and didn’t try to influence the party platform if he took any issue with it. But he did vote for President Obama — twice. “When is a Republican a Republican?”

To the contrary, Democratic strategist Marjorie Clifton said Powell “genuinely wants to improve things for the Republican Party, and I think that his taking a stand on this issue is his way of doing that.” Citing the GOP’s room for improvement when it comes to their approach to minorities, Clifton said Powell is speaking to a desire to see a “broadening of the tent.”

Furthermore, she argued, Powell’s “sensitivities” to the issue are understandable, given his experience as an African-American man. Blakeman pointed to the unemployment rate in inner cities, citing a policy versus rhetoric juxtaposition, arguing that Republicans have been “open” — and Democratic policies haven’t worked.

“We reject anyone in our party who makes disparaging comments,” he added. Clifton agreed that both parties could use a cultural shift, but particularly highlighted the GOP. “We take no group for granted,” Blakeman responded.