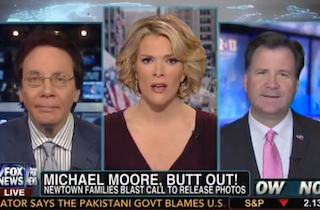 In order to “finish off the NRA,” filmmaker and gun control advocate Michael Moore called for the release of the crime scene photos from the shooting at Sandy Hook Elementary School, arguing that the shock would incite change. Weighing the proposal’s merits, Megyn Kelly invited her panel to question not only the idea itself but whether the photos would have a significant effect.

Kelly noted that she initially found Moore’s proposal “hideous” — but “to be honest, when you read Michael Moore’s piece, he gives you something to think about.” His point, essentially, was that seeing the photos would make it less easy to move on, force you to confront the reality of what happened.

If the parents are willing (some have opposed the call), she asked, why not? Alan Colmes thought it a “fair argument,” but sympathized with those Newtown parents who think it simply isn’t Moore’s place to advise. Furthermore, Colmes said the shock wouldn’t necessarily have much of an impact. For example, “showing pictures of fetuses has not stopped the pro-choice movement.”

Growing emotional, Kelly mentioned Veronique Pozner, mother of six-year-old Noah, who took Connecticut Gov. Dannel Malloy to see her son at his open-casket funeral. “If people saw that kind of thing — but from the people who wanted it to be seen — would it change this debate?”

“I don’t think it would,” Lars Larson asserted, adding that Moore “seems to delight in saying outrageous things” for the sake of attention. The photos would only “inflame the emotions of the jury,” he said. Individual parents can’t be faulted for choosing to release the photos, he continued, but it wouldn’t serve the purpose Moore argued.

Kelly agreed that in court something “too prejudicial” wouldn’t be allowed since the jury is not supposed to make decisions based on emotions. “We’ve already been horrified enough,” Colmes chimed in. But both he and Larson agreed that each parent has the right to make their own decision about the matter.

Getting more into details, Larson argued the debate shouldn’t be about which weapon was used, while Kelly noted that some would be banned under Sen. Dianne Feinstein’s bill. Is there anything, she asked, that could be a game changer in the discourse at this point, be it photos or something else?

Like the abortion debate, Colmes said, it’s very ideological and the debate doesn’t lend itself to finding common ground. “I’m not sure we’re going to change any minds no matter what happens.”