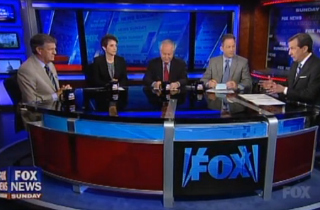 Fox News Sunday‘s political panel took on the revelation that the Syrian government has used chemical weapons against opposition forces within the country, provoking a question of whether President Obama‘s so-called “red line” has been crossed and whether U.S. military action has now become necessary despite the president’s hesitance.

“Obama put himself in a box here,” host Chris Wallace observed of the president’s condemnation of the Assad regime’s reported use of chemical weapons. “He kept talking for months about ‘red lines’ … but he’s clearly mindful of bad intelligence that led into Iraq, and it’s also clear that he never wanted to get involved militarily in Syria.”

“What he’s trying to do now is insist on ironclad proof,” Brit Hume suggested, quipping that perhaps Obama wants a signed affidavit from the Syrian president declaring that he has, indeed, used chemical weapons against his own people. “A president who didn’t want to intervene to stop the deaths of what is now 70,000 people, I don’t think is going to go on, at least arguably, incomplete evidence,” he added.

Hume also slammed the president’s equivocation as “regrettable” because such cold feet on military intervention “has a price — it emboldens enemies, it discourages allies, and it is a problem.”

Political reporter Amy Walter chimed in that with the “cloud of Iraq and Afghanistan” still looming, there is a “strong distaste on the part of Americans” for military intervention in another Middle Eastern country.

Weekly Standard editor Bill Kristol told Wallace that the president’s failure to intervene sends the message that “this is not a president who wants to start another war.”

“I think it’s totally irresponsible for an American president to have that,” noted warhawk Kristol added. “No one wants to start wars, but you’ve got to do what you’ve got to do.” He also dismissed polls that show the public is opposed to American intervention before reminiscing for a time when there were “liberal internationalists” who would be in favor of committing U.S. troops to break up the conflict overseas.