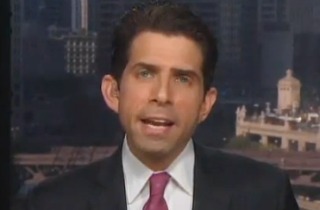 On last week’s Cashin’ In, Fox’s Eric Bolling and his panel of guests asked the provocative question of whether it’s time to start profiling Muslims to fight back in the War on Terror. Jonathan Hoenig argued, “The last war this country won, we put Japanese-Americans in internment camps, we dropped nuclear bombs on residential city centers. So, yes, profiling would be at least a good start.”

In the ensuing week, Hoenig has received an onslaught of backlash. House Democrat Mike Honda called those comments “idiotic and insensitive,” and declared, “Until Mr. Hoenig and Fox News offer a full and unequivocal apology to the Japanese American and Muslim American communities, he should not be allowed to appear on their network.”

In addition, both the Japanese American Citizens League and the National Council of Asian Pacific Americans released statements [PDFs] condemning Hoenig’s comments, with additional calls for an apology from Hoenig and Fox.

At the end of today’s Cashin’ In, Hoenig took the time to issue a sincere apology for those comments, though he believes they were misinterpreted. He elaborated:

“My point was to illustrate that profiling potential threats based on ideology could be a needed safeguard, and in the context of wartime, I believe being able to identify an enemy’s ideology, and be on the alert for it, is the first step to actually achieving peace.”

And you can watch the segment on profiling here (Hoenig’s comments start at the 1:27 mark):