Fox Panelist On NBC Edit: NBC Has Ties To MSNBC, ‘A Kind Of Promoter’ Of ‘Trayvon As Victim Theme’
Video

Fox Panelist On NBC Edit: NBC Has Ties To MSNBC, ‘A Kind Of Promoter’ Of ‘Trayvon As Victim Theme’ 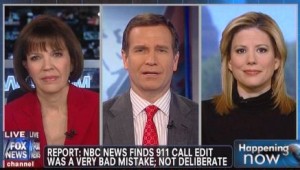 On Friday’s Happening Now, investigative journalist Judith Miller and Daily Beast columnist Kirsten Powers weighed in on NBC’s edit of George Zimmerman‘s 911 call before shooting Trayvon Martin — an edit that has inspired criticism for having made Zimmerman “sound racist.”

The edit has been blamed on a producer at NBC and Miller, for one, takes issue with the passive phrasing of the network’s statement and notes that no apologies have been made to the one viewer who likely most needs them — Zimmerman.

Host Jon Scott turned things over to Powers, weighing in that “spicing up” the call by emphasizing Zimmerman’s mention of Martin’s race is “pretty appalling.”

While she’s inclined to give the network the benefit of the doubt, Powers did note the editing was “a little suspicious” given the larger, race-related issues surrounding this particular case.

Miller emphasized NBC’s connection to MSNBC which, she said, “has been really a kind of promoter of the Trayvon as victim theme and meme, and therefore, you know, they’ve had Al Sharpton not only having his own show in which he’s been highlighting this case and a demand for justice by the family and by so many Americans, but he is also… not only has his own show, but also has been leading marches” So NBC, she added, should have been “particularly careful about making such a mistake.”

She also noted that “many reporters drew conclusions” about Zimmerman based on NBC’s edit of his call to 911.