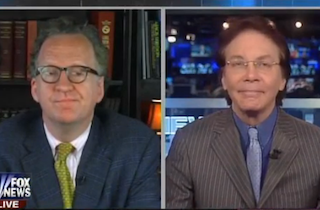 Jim Pinkerton and Alan Colmes appeared on Fox News on Monday morning to weigh in on the media’s double standard in NSA coverage. Pegged over Glenn Greenwald‘s own comments about hypocrisy, both Pinkerton and Colmes chided the media for “clobbering” leaker Edward Snowden while holding a different view under President George W. Bush.

Greenwald’s correct in noting that the media were against surveillance during the Bush years but now, under Obama, seek to defend it. The New York Times reporters from 2006 won Pulitzer Prizes, while Greenwald certainly won’t, Pinkerton argued. Because his revelations are “effectively pointed at the Obama administration.”

Colmes didn’t disagree, but pointed out a Pew poll that said Republicans’ opinions on the issue have also shifted — “less supportive because Obama’s president.” Not only are other reporters “clobbering” Snowden, Pinkerton added, but they’re not paying attention to the specifics of the story. Questions about the actual story are “getting lost” because they’d be “embarrassing” for the administration.

“We need to know how this happened, why this happened,” Colmes affirmed. As a self-proclaimed civil libertarian, he made clear that he didn’t like this type of surveillance under Bush and he still doesn’t like it now.

As Pinkerton mentioned the “mainstream media,” Colmes pushed back against the notion of such a “monolithic entity.” What does it even mean? Is Greenwald part of it? Is the Guardian? “I’m not sure it has the same meaning it had five or ten years ago,” he argued.

Pinkerton pointed to the difference between ideology and partisanship, deeming Greenwald an ideologue — whereas those who are partisan simply base opinions on who’s in charge. Rounding out the segment, though, Colmes revisited his earlier point about how opinions have changed among both Democrats and Republicans.

(Meanwhile, the leaker Snowden also called out the “mainstream media” for being “far more interested in what I said when I was 17 or what my girlfriend looks like rather than, say, the largest program of suspicionless surveillance in human history.”)