Fox That! CNN Reporter Bristles at Being Compared to ‘That F Network’

Fox That! CNN Reporter Bristles at Being Compared to ‘That F Network’ 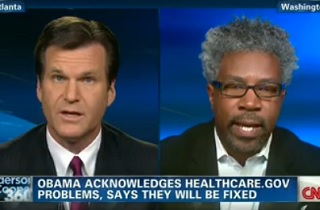 The story of the week has been the mainstream media’s sudden notice of the weeks-long fustercluck that has been the rollout of the Obamacare website, Healthcare.gov. The government shutdown’s “both sides” narrative has suddenly shifted to a decidedly (and deliberately) one-sided narrative about Obamacare, and when CNN political analyst Cornell Belcher called out investigative reporter Drew Griffin this week, Griffin responded with an unusual defense for being compared to “that F network.”

Belcher, a panelist on Anderson Cooper’s AC360, blasted Griffin’s reporting on the Affordable Care Act, telling Cooper “I think that story we just ran was a story more deserving of FOX than CNN, where you’re cherry picking cases where it doesn’t work.”

Belcher was referring to a package in which Griffin profiled three consumers who expressed disappointment in the Affordable Care Act, although in each case, the reporting was incomplete, or suspect. For example, Belcher pointed out that based on Griffin’s reporting on one family whose premium supposedly increased by $150 a month, “We don’t even know if the government subsidies apply to them.”

The plan that Griffin used to compare with a North Carolina businessman’s pre-Obamacare plan was a “gold” plan, the second-most comprehensive plan available, which Griffin failed to disclose. He also never explained why the government employee he spoke to why she didn’t have government health benefits, or why she wouldn’t qualify for a subsidy. According to the Kaiser Foundation’s calculator, she’d be eligible for a silver plan at $132.25 a month.

“I just was compared to that F network,” Griffin cut in, “and I just want to kind of defend myself here.”

But Belcher’s central complaint, that these three cases were cherry-picked and one-sided, appears to be a feature, not a bug, for Griffin. Immediately following the report itself, Griffin fairly boasted to Anderson Cooper about his report’s one-sidedness. “We did not seek out people who have found success under the Affordable Care Act,” he told Cooper. “The President today touted many people, many of them seemingly with preexisting conditions, who will fare better under the act. But with Healthcare.gov’s Facebook, also through small business groups, another network CNN looked for, and we found, these three individual cases, these are people looking forward to better coverage under the act and who wound up being disappointed.”

Cooper also explained to Belcher that, because the President had given a speech about people whom the Affordable Care Act helped, “the idea it was sort of to counter against that.”

After letting it sink in that CNN’s Anderson Cooper and Drew Griffin feel it is their duty to counter what the President says, ask yourself what they did when they encountered reporting that didn’t fit their mission. Maybe that comparison is actually unfair to Fox, since Sean Hannity at least appears not to have been aware that his sources were full of it.

“I want to apologize for connecting you with the F network,” Belcher joked to Griffin. “I know that’s probably going farther than you deserve. But here’s main pushback here, my main pushback is this. We have the President saying that millions upon millions of Americans are going to be able to afford this. And then you have CNN, saying — who’s supposed to be sort of be — you know, in the middle guy, saying that these are people who won’t be able to afford it. You know, we got Republicans on the other side sort of making that case. I don’t like CNN making the case on — you know, making that case for the Republicans. That’s my pushback.”

CNN occupies a unique space in cable news, as Belcher articulated, but whether you’re “down the middle,” or “Leaning Forward,” or even if you’re Fox News, a journalist’s duty is to the truth, not to evening out the score. Griffin’s and Cooper’s admission, nay boast, that they set out to “counter” what the President said is extraordinary, and a good deal further than Fox News ever goes, at least out loud.