Fox’s Beckel Slams Sen. McConnell For ‘Disgraceful’ IRS Ad: ‘You Ought To Be Ashamed Of Yourself!’
VIDEO

Fox’s Beckel Slams Sen. McConnell For ‘Disgraceful’ IRS Ad: ‘You Ought To Be Ashamed Of Yourself!’ 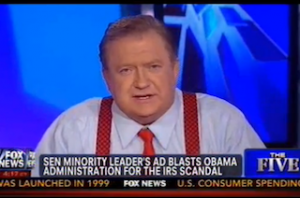 Friday afternoon on The Five, Bob Beckel tore into Sen. Mitch McConnell (R-KY) for an online ad he released this week that uses the IRS scandal to equate President Obama with Richard Nixon. Beckel called it “one of the cheapest ads I’ve seen” and said to McConnell, “you ought to be ashamed of yourself!”

“To politicize this thing before you have the hearings,” Beckel went on, “and to go on the air with that kind ad, that’s a muckraking, disgraceful, disgusting ad, and it’s typical of a guy from the bourbon state.” To protestations from his co-hosts, Beckel said “in my worst day” he would never have put an ad like that on the air.

The rest of The Five‘s hosts tried to convince Beckel that what the IRS did was so bad that it’s justified for McConnell to use the info that he does have more than a year before her Senate election. “Bob, you’re missing the point,” Kimberly Guilfoyle said. “It’s so blatantly discriminatory on its face, because they’re targeting a specific group or a specific ideology and within the same group, within the same kind of category and saying if you believe and you’re a conservative, you’re tea party, you’re going to get the scrutiny. On the left, you get a pass. That’s the problem.”

While Beckel could agree that there was wrongdoing by the IRS, he maintained that the comparison between Nixon, a “disgraceful, disruptive, corrupt president” and Obama, Eric Holder or anyone else in the administration was completely unwarranted.