Fox’s Bob Beckel: Give Obama ‘A Break’ on Egypt, ‘The Guy’s on Vacation’ 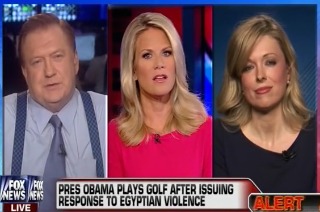 On Friday, Fox News Channel’s Martha MacCallum hosted a panel discussion which debated whether President Barack Obama was being proactive enough in addressing the unfolding crisis in Egypt. The Five co-host Bob Beckel said that the president has few options to address the situation in that North African country. Furthermore, it was unfair to criticize Obama for taking a hands-off approach because “the guy’s on vacation.”

MacCallum began the segment by reporting that, after making a statement on the crisis in Egypt, Obama went to play a round of golf during his vacation on Martha’s Vineyard. “Everybody knows the president is on vacation,” she said. “The question is, is that a smart way to present the president in terms of how he is handling this crisis while he is on vacation?”

“Are we kidding each other?” Beckel asked. “The guy’s on vacation. He’s gonna play golf. What is he gonna do about Egypt beyond the statement he made?”

“I think you just have to give him a break,” Beckel concluded.

MacCallum countered by saying that, while “every president needs a break,” former President George W. Bush stopped playing golf during the Iraq War in order to avoid the appearance of callousness.

“I really don’t think the American people begrudge a president doing what he wants to do on a vacation,” Beckel replied. “There’s very little he can do.”