The Five’s Bob Beckel Unloads On Zimmerman: ‘A Wannabe Cop Who Didn’t Like Black People!’ 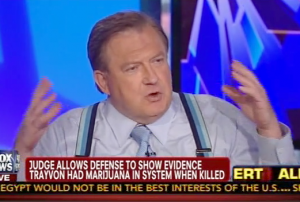 Fox’s The Five opened tonight taking on the latest from the George Zimmerman murder trial. Eric Bolling, Kimberly Guilfoyle, and Andrea Tantaros agreed the prosecution’s case is shot, Greg Gutfeld continued to express his apathy for the whole thing, and Bob Beckel continued hammering Zimmerman, loudly proclaiming him a “wannabe cop who didn’t like black people.”

Guilfoyle said that the prosecution had a burden in the case to prove Zimmerman had “hatred, ill will toward Trayvon Martin so bad, so evil to justify a second-degree murder conviction,” and they failed to make their case. She also noted the 911 tape where it’s either Martin or Zimmerman screaming, and how a number of people close to Zimmerman have testified it’s him on the tape. Beckel rolled his eyes and remarked, “They’re all close to Zimmerman! Of course they’re gonna say it was his voice!”

RELATED: FL Defense Lawyer On CNN: After Today, ‘Impossible’ Not To See Zimmerman ‘As A Good Guy’

Beckel continued by piling on Zimmerman and accusing him of harboring racial bias before he even met Martin.

“This guy had already been profiling black kids in that neighborhood. There’s been a record of that. The guy was a wannabe cop who didn’t like black people!”

Beckel insisted that Zimmerman regularly “called in black kids,” while Guilfoyle shot back that he was just a community organizer doing neighborhood watch, and there’s no record of him ever profiling black people. Gutfeld charged that Beckel’s attitude is the same one pushed by the media for over a year, and said they only want to cover the case because it reflects a viewpoint that “America is nothing but a racist country.”

Bolling agreed that the media’s had their verdict since the very beginning, and he, Tantaros, and Guilfoyle agreed with Dan Abrams‘ assessment on ABC today that it would be a shock at this point if Zimmerman was found guilty.

In response to the breaking news about Martin’s toxicology report showing THC in his system now being allowed to enter as evidence, Beckel suggested that’s a good thing for the prosecution.

Gutfeld shot back that Beckel has said before that pot can drive people crazy. Beckel replied, “Drives ’em stoned crazy!”