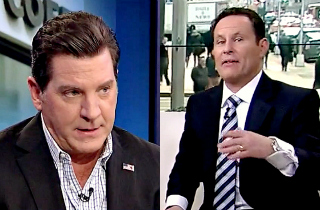 Starbucks’ #racetogether campaign, in which baristas are instructed to begin conversations on race with customers, drew bipartisan mockery yesterday, to the point that a Starbucks executive had to shut down his Twitter account.

“I like this idea,” Bolling said on The Five last night, getting a double-take from Juan Williams. “I think it’s a great way to start the conversation. …Fantastic that they are going to take the discussion from behind the counter to the people.”

“This is a guy wanting to solve major problems,” Kilmeade said on Fox & Friends Wednesday morning. “We have a water issue around the world, he’s trying to do that. We have an issue with jobs, he tried to do a jobs program with bracelets.”

“I salute [Starbucks CEO] Howard Schultz; he’s trying to make a difference while still making a lot of money off it,” Kilmeade said. “Bring back the days when we talked about The Jeffersons and All in the Family, who made fun of race relations. I liked those days!”

Watch the clips below, preferably while holding up the line in Starbucks, via Fox News: