Fox’s Bolling Goes Off On Royal Baby ‘Absurdity’: Why Should Americans ‘Look Up To Kate Middleton?’
VIDEO

Fox’s Bolling Goes Off On Royal Baby ‘Absurdity’: Why Should Americans ‘Look Up To Kate Middleton?’ 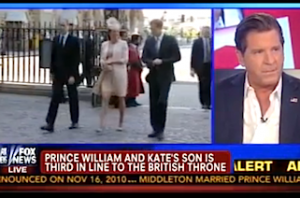 After a semi-serious opening segment on the birth of the royal baby, The Five’s continued coverage of the story devolved into a segment that mocked both President Obama and the British royal family in equal measure. Eric Bolling was particularly enraged by the “absurd” pageantry, demanding to know why Americans “look up to Kate Middleton.”

Greg Gutfeld began by “reading” the statement from the Obamas, congratulating the new parents, and, in Gutfeld’s version asking whether the new baby is actually the “anti-Christ.”

This led Bolling to suggest a name for the new baby: “His Royal Highness Prince Barack Obama of Cambridge.” Why? Because a “monarchy” is “what President Obama wants for here. He’d love a monarchy.” Continuing down this curious path, Bolling asked, “Didn’t we fight tyranny? Didn’t George Washington lay it down, say guess what, Britain, we’re tired of this taxation without representation, tyranny, monarchy? We’re done with that.”

Beyond that, Bolling thought the way the British are reacting to the birth is “absurdity” with people “going crazy,” “popping champagne,” and “crying.” He began tearing apart the royal family themselves for failing to add anything constructive to society, despite their alleged $2 billion net worth. “What do they get paid to do?” he asked. “What do they provide?” Noting that the Queen recently took a pay cut from $36 million a year to $32 million, Bolling asked, “it takes 32 million bucks a year to buy those hats?”

Gutfeld helped Bolling out by showing him the American equivalent to the royal family. “We don’t have royalty here, we have celebrity,” he said. “Our royal family is the Kardashians. So when the Kardashians pop out a baby, it’s the same thing pretty much… They are America’s royalty.”

Furthering the comparison between the royals and American reality stars, Bolling asked, “Why do we look up to Kate Middleton? What did Kate Middleton do other than be very attractive and meet the prince?”

Kimberly Guilfoyle was the only one in the room truly taking the royal baby’s birth seriously, hailing the “historical significance” of the “future world leader that’s going to deal directly with the United States” and adding, “hopefully this prince will stand with the United States and continue the relationship internationally that we have enjoyed with Britain.”

And, Dana Perino summed it up when she said, “I wish we could be there listening to Will and Kate, thinking I cannot believe people in America are doing live TV on us constantly, 24/7.” At the same time, she added, “I would take royal baby coverage over the Zimmerman trial coverage any day.”