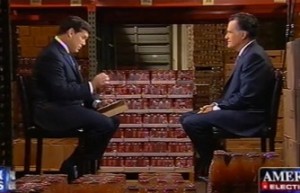 Fox News’ Bret Baier conducted a great interview with former Massachusetts Gov. Mitt Romney Tuesday night, challenging the candidate to answer a number of harsh criticisms that have been leveled at him. Romney was back on his heels for much of the interview, but never more than when Baier tried to get him to explain how his position on immigration differed from the one he attacked Newt Gingrich for.

Gingrich was roundly attacked at last week’s debate for proposing what he called a “humane” immigration policy, one that would not expel undocumented immigrants who have been in the US for 25 years, who have children and grandchildren, and who belong to a church. He took great care to specify that even that narrow subset of immigrants would not be granted citizenship, but rather, some kind of interim legal status.

His rivals, Romney most vocally, pounced on the suggestion, labeling it “amnesty.” In his interview with Romney Tuesday night, Bret Baier pointed out that Romney “took a similar position back in 2006-2007, telling Bloomberg that some illegal immigrants need to be allowed to stay, come out of the shadows,” and asked, “Is that different than where you are now?”

Over the next several minutes, Romney tried his best to dodge the question, even falsely accusing Gingrich of supporting citizenship for that narrow sliver of illegal immigrants, and trying to skirt the issue of deportations by saying, “Whether they apply here or apply by going home, I think I’ve said in the past it makes more sense for them to go home if we set up a system to apply here.”

So, maybe deport them? Baier kept at him, trying to get him to explain “What you do with the 11-plus million people who are already here, how you handle them.”

“What do you do with them?” Baier asked, one last time.

Romney delivered a rambling, exasperated summation that notably did not include deporting the people who are already here. He talked about securing the border and denying “tuition breaks” and “amnesty” before even thinking about the undocumented immigrants who are already in the US.

“To make it as clear as I can possibly can,” Romney said,  “let those people apply, just like everybody else that wants to come to this country, but they have to apply at the back of the line, as opposed to jumping in the front because they’ve come here illegally.”

Clearly, the only difference between Romney’s position and Newt Gingrich’s is that Romney decided not to use the word “humane.”

While Romney has been withstanding heat for months for being a “flip-flopper,” this immigration issue is positioned to really damage him. It was immigration that sank Rick Perry’s candidacy, and now that Romney’s chief rival is Newt Gingrich, there couldn’t be a worse time for Romney to fail so badly on this question.

Gingrich already appears to have weathered this attack, but Romney, still reeling from being snubbed by the Manchester Union Leader, can ill afford to lose ground on such a key issue with Republican voters.

Ironically, when a group of reporters challenged Romney about avoiding their questions earlier today, one of them asked, “Is there a particular reason you’re only speaking to Fox News?”

The implication seems to have been that Romney could expect an easier time of it from Fox News, but as Baier’s interview demonstrates, apparently nothing is easy for Mitt Romney these days.