Fox’s Cashin’ In: ‘The Enemy Is Islamic,’ It’s Time to Start Profiling Muslims

Fox’s Cashin’ In: ‘The Enemy Is Islamic,’ It’s Time to Start Profiling Muslims 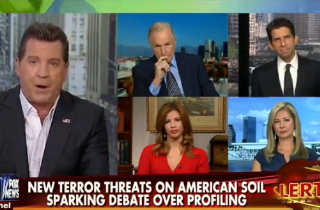 For what was deemed the “most controversial” topic ever discussed on Fox’s Cashin’ In, all the guests seemed to agree: It’s time to start profiling Muslims in America.

“While the administration buries its head in the sand,” host Eric Bolling said of alleged jihadist recruitment in the United States, “we know how to find terrorists among us: Profile, profile, profile.”

M*A*S*H star-turned-investor Wayne Rogers agreed: “There’s no other way. You’ve got to do it. It’s stupid not to.”

We should have been profiling on September 12, 2001. Let’s take a trip down memory lane here: The last war this country won, we put Japanese-Americans in internment camps, we dropped nuclear bombs on residential city centers. So, yes, profiling would be at least a good start. It’s not on skin color, however, it’s on ideology: Muslim, Islamists, jihadist. That’s a good start but it’s only a start. We need to stop giving Korans to Gitmo prisoners, we need to stop having Ramadan and Iftar celebrations in the White House. We need to stop saying the enemy is not Islamic. They are.

Bolling then rattled off historical terrorist attacks: The 1983 Beirut barracks bombing, the 1988 Pan Am Flight 103 bombing, the 1993 World Trade Center bombing, the 9/11 attacks, and the Boston Marathon bombing. The “common thread” he found? “Muslim males.” And so: “Is it okay to say it’s time to start profiling Muslim males? I say, yes, it is.”

We don’t have a problem with extreme Buddhists. We have a problem with extreme Muslims; to ignore that is not fair. This is to protect all Americans: Christian and Muslim Americans, everyone. Because they pose a danger to all of us. And if you’re a Muslim who’s going to Syria, yes, you should be tracked. We should know what you’re doing there, why you’re going there. I don’t think that that’s irresponsible.

Bolling posted this to Twitter following the segment, as part of a social media question:

Time to profile! That way we don't have to pat down granny at the airport while Jihad Joe waltzes through #CashinIn pic.twitter.com/sNDfIBZsnj

Watch the whole clip below, via Fox: