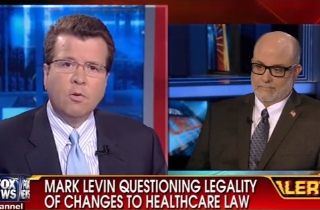 Why does Mark Levin “rev it up a notch” and “yell and scream” on his radio show? That’s what Fox’s Neil Cavuto wanted to know this afternoon while interviewing conservative author Mark Levin.

“Reading your books, you’re a great writer, obviously very smart,” Cavuto said before asking: “And then I hear your radio show where you rev it up a notch and yell and scream. I love it. I think it’s very entertaining. But is that by design?”

“Do you then take the passion that you have and raise it to the point where you’ll yell at liberal guests?” Cavuto added.

“This is my personality,” Levin responded. “I don’t go to a dinner table and start yelling at people, but if some liberal’s there and they stick their finger in my face and they won’t be quiet, then I address them when they keep doing that to me.”

He continued: “I have a fury in me about what is happening in this country. I see it dissolving in front of me. I see politicians who are flimflamming the American people…. I see timidity and cowardice and cronyism and I see people struggle to keep jobs and run businesses with the President of the United States flying off to Martha’s Vineyard and sending his dog in another jet.”

Asked how history will remember current President Barack Obama, Levin responded: “Depends who writes the history books. If the liberals write it? The greatest president in history. If serious people write it? He will be down there with John Tyler and James Buchanan.”