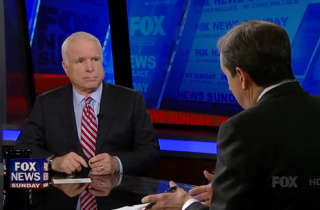 When asked by Wallace whether he would oppose higher income tax on the wealthy as part of a “fiscal cliff” avoiding deal with Democrats, McCain said: “I would be very much opposed to raising tax rates. But I do believe we can close a lot of loopholes […] Things like a limit on the amount of deduction of charitable giving. A limit on the amount you can take on your home loan mortgage deduction.”

Wallace then confronted McCain with the fact that during George W. Bush‘s administration, the senator voted against the so-called “Bush tax cuts” because, at the time, he said they did not directly benefit the middle class.

“You said too many of the benefits go to the wealthy, not to the middle class,” Wallace pushed McCain. “But if you could get a solid deal with, as you call for, spending cuts and entitlement reform […] why is the 35 percent top tax rate which you opposed sacred?”

McCain replied: “Because every economist that I respect says if you raise tax rates at this time — in fact, the president even said that a couple of years ago — it harms the economy.”

He continued: “We are trying to help the economy. And, so, unless I can be convinced that raising tax rates will be beneficial, then obviously I think there’s reason and ground for my position. But I also believe that we can and must get an agreement, otherwise I think — first of all — the markets are going to start reacting.”