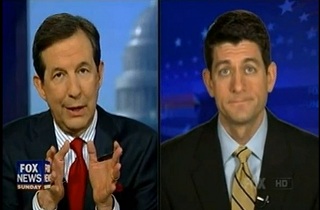 Fox News Sunday host Chris Wallace grilled former vice-presidential candidate and Congressman Paul Ryan (R-WI) on his positon on Obamacare and its relation to Medicaid. Ryan told Wallace that he still hopes to see Obamacare repealed due to its impact on other medical entitlements.

Ryan told Wallace that Obamacare has led to all kind of problems for states by impacting Medicaid and that states need to be allowed to tailor the program more appropriately on a case-by-case basis. Wallace challenged Ryan on his proposed cut of $770 billion dollars and its potential impact on delivery of the program. Ryan said they can do it because it hasn’t been implemented yet.

“These are increases that have not come yet. By repealing Obamacare and the Medicaid expansions that haven’t occurred yet, we’re basically preventing an explosion of a program that is already failing. So we’re saying don’t grow this program through Obamacare because it doesn’t work,” he said.

Ryan explained various state programs that have been impacted by Obamacare prompting Wallace to challenge him on the possiblity of repeal.

“Are you saying that as part of your budget you assume the repeal of Obamacare?” asked Wallace.

“Well, we believe it should. That’s the point. This is what budgeting is all about. It’s about making tough choices to solve our country’s problems,” said Ryan.

Ryan then explained that he thinks Obamacare puts Medicare under the control of a “rationing board.”

Watch clip below via Fox: