Fox’s Chris Wallace: No, Obama Was Not ‘Stoking Racial Tensions’ With Zimmerman Speech 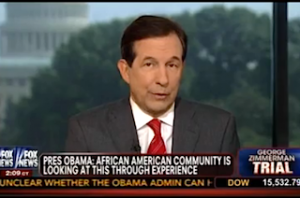 While other Fox commentators have been criticizing President Obama‘s unexpected speech on race and the George Zimmerman verdict for furthering the racial divide in America, Fox News Sunday host Chris Wallace said Friday afternoon that he doesn’t “see how you can read this as in any way stoking racial tensions.”

When Fox host Trace Gallagher asked Wallace if he thought Obama’s decision to speak on the matter was “risky,” he responded, “No, I don’t think so at all. I thought that president was trying to put this in context and I think, to a certain degree, he was trying to explain, in a verdict that has been somewhat divisive in this country, why both sides feel the way they do.” Wallace said Obama was simply “trying to say to Americans of all colors and all political persuasions: try to understand and try to learn from what happened here.”

Wallace said he was particularly moved by the section of Obama’s remarks regarding the younger generation, including his two daughters, which is “better than people of our ages were in the sense they’re more color blind, they don’t see whites see black, or blacks see whites as much of a threat.”

Continuing, Wallace commended the president for handling the matter in a “forthright” fashion, much as he did in his 2008 campaign speech on race. “Boy, I sure don’t see how you can read this as in any way stoking racial tensions,” he said. “This is a president who believes in teachable moments, and I think he felt the desire to be on the record and to say what the felt on these issues.”