Fox’s Doocy to Sen. Manchin: Are Dems ‘In Denial’ About Obamacare Fallout?
VIDEO

Fox’s Doocy to Sen. Manchin: Are Dems ‘In Denial’ About Obamacare Fallout? 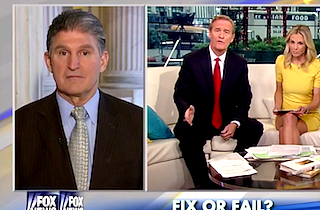 After reiterating his issues with the Affordable Care Act, which he has more vocally opposed than some of his Democratic colleagues have, Senator Joe Manchin (D-WV) fielded a question Wednesday morning from Fox & Friends host Steve Doocy on why the only Democrats proposing fixes to the ACA were ones up for reelection in vulnerable districts.

“Why is it that aside from you, the only other Democrats who are talking about fixing this—I mean, it seems like a lot of members of your party are in denial—are the ones who are going to be in tough elections next year?” Doocy asked.

“I can’t speak for my colleagues,” Manchin said. “I really can’t. Mary Landrieu (D-LA) and I have said this: The promise has been made. If you have it, keep it. You can keep it in perpetuity.”

“Now, my friend Fred Upton (R-MI) said anybody can go and buy a standard policy,” Manchin said, referring to the author of a House bill to amend the ACA to allow customers to keep their policies. “I said, ‘Fred, we have to move forward. That’s not good.’ You know, Fred’s easy to work with, we can come to an agreement. But Mary and I stood fast on this, where we want to be. Mark Kirk (R-IL) and I have said, ‘Listen, this is a transition year. Don’t threaten me with a crime or a fine, when you don’t have your act together.’ It will take this transitional year. There is nothing wrong with that.”