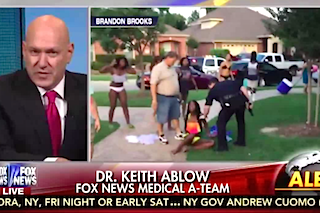 It was only a matter of time. First, Bill O’Reilly claimed that the liberal media was fueling a “growing disrespect for police officers.” Then, Sean Hannity argued that the McKinney, Texas officer who pulled his gun on a group of black teenagers at a pool party was “provoked.” And then finally, this morning, Fox News’ resident psychoanalyst Dr. Keith Ablow laid the blame for this past weekend’s incident on President Barack Obama.

Asked by the Fox & Friends hosts Wednesday morning why he believes the McKinney confrontation became so out of control, Ablow reminisced about the good old days. “You know, when I was a kid growing up, if a police officer showed up, you were quiet, you answered questions.”

“You did pretty much what you were told,” he continued. “Not so now. Things have shifted, and that’s a shift encouraged by some leaders.”

Egged on by Steve Doocy to explain what he meant by “some leaders,” Ablow stated, “I don’t think our president or our former attorney general did anything to help people out when they seemed to side with folks other than the police or, for that matter, the mayor of New York. So, these messages are very powerful. And they’re heard by young people who may think of it as a cause célèbre to sort of resist police officers.”

So, in Ablow’s view, if President Obama and former Attorney General Eric Holder had defended the actions of police more over the last few months and years, then the McKinney officer would never have been forced to slam a young, bikini-clad girl to the ground and pull his firearm on the teens in the first place.