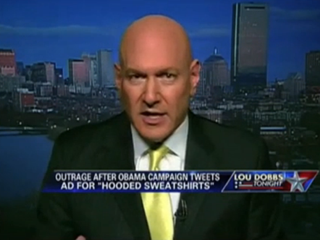 Host Lou Dobbs made clear in the segment that he was not particularly comfortable with the language the President used, and asked Dr. Ablow for comment (Dr. Ablow functions as much medical correspondent as political pundit for both Fox News and Fox Business). Needless to say, the fact that the President would express empathy the way he did was “outrageous to me,” Dr. Ablow argued, and “beneath the office” of the Presidency, to express grief. What’s more, Dr. Ablow argued, his statement wasn’t even true! “Look, if the President had a son, he wouldn’t look anything like Trayvon Martin,” he told Dobbs. “He’d be wearing a blazer from his prep school, he’d be driving a beamer, and he’d be surrounded by Secret Service.” That’s right– Dr. Ablow knows for certain that President Obama would definitely never let his children wear hoodies, ever. Dr. Ablow also complained that the President saying a black child resembles him “makes other people feel marginalized,” since they cannot look like the victim. This is apparently too large a burden to place on the nation in exchange for lending the dead teenager’s family some sympathy.

Dr. Ablow enters this Trayvon Martin discussion with a rather illustrious record of completely inappropriate, outrageous, or just plain weird statements– from his first appearance on the cable news radar on this Glenn Beck book cover to the time he compared acknowledging Chaz Bono‘s existence to promoting anorexia and his spirited defense of Newt Gingrich‘s philandering. So really, the surprise here is why it took so long to Dr. Ablow to inject himself into the conversation with an eyeroll-inducing argument– enough time for Geraldo Rivera to hop in and make the “he’d be wearing a blazer” argument in an even more ridiculous way.