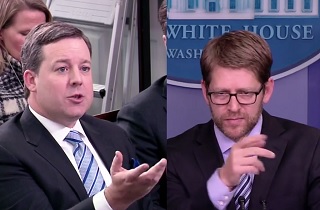 While the rest of the press corps tried to get White House Press Secretary Jay Carney to agree to a negotiation on offsets for extended unemployment insurance at Tuesday’s daily briefing, Fox News Chief White House correspondent Ed Henry tried to get Carney to take responsibility, on behalf of President Obama, for long-term unemployment. Henry posed his questions to Carney at some length, and Carney responded at even greater length.

“When the president today, in talking about the unemployment benefit issue acknowledged, as Gene Sperling did yesterday at the podium, that long-term unemployment is still a big problem in this country, since he’s now been in office for five years, will he acknowledge that some of that is his responsibility?” Henry asked, and then declared, “It’s not just policies from the Bush administration, but he’s now had five years. Does he bear some responsibility for long-term unemployment?”

Carney responded that the president believes that “everyone who is sent to Washington by their representatives bears responsibility for taking action to help the economy and help the American people. And that’s why economic growth, job creation, middle-class security have been the cornerstones of his domestic policy since the day he was sworn into office.”

He added that the root causes of long-term unemployment go back decades, and were “gravely exacerbated by the worst recession since the Great Depression.”

“When you talk about the millions of jobs that have been created, and some of the recovery that we’ve seen under the president, you certainly take credit for that, that his policies have worked in some ways,” Henry said. “Will you also take responsibility that when you have a record number of people on food stamps; when you’ve got, as he says, and Gene Sperling said yesterday, this long-term unemployment problem, some of his policies have not worked.”

“Well, I’m not sure that’s what he said,” Carney replied. “He said that long-term unemployment continues to be a persistent problem that we need to address. And we look forward to collaboration and cooperation from Congress on measures that will help the long-term unemployed, that will help other unemployed Americans strengthen the middle class, help our economy grow. And the President has put forward a host of proposals that are of the nature that have traditionally enjoyed bipartisan support, including his proposal to combine a simplification and reduction in the corporate tax rate as part of a package of investments that would help build our infrastructure and put people back to work.”

“So this President is very eager to have conversations with members of Congress about what we can do to further the economic expansion, further the job creation that we’ve seen,” he continued. “Because there’s no question — given that we started this enterprise here, the President did, when we were hemorrhaging jobs at 800,000 per month, and that job loss was sustained and dramatic — the work is not yet finished, not even close to finished, which is why it’s the President’s primary preoccupation.”