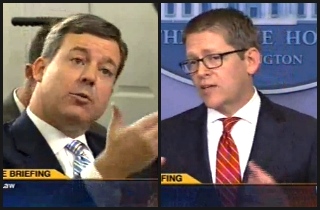 While discussing the reports indicating increased health care costs under the administration’s established “marketplaces,” Henry asked why the White House wouldn’t directly show an “apples to apples” comparison that would reveal how some people’s costs will rise under the Affordable Care Act.

Carney responded by pointing out that the ACA’s exchanges offer multiple levels of plans, making it an unfair comparison. “This is not an apples to apples comparison,” he warned. “It’s an apple full of worms compared to an apple that’s fresh and delicious. You’re talking about situation where some families in some states had one option and it was unaffordable. Now they have multiple options, 50-some-odd plans to choose from and the report that was released today demonstrates that these plans were are affordable.”

If that’s the case then, Henry later asked, “Will Jay Carney enroll in this? Will White House staff enroll in Obamacare?”

When Carney seemed to dismiss the question, Henry interrupted, saying “But the premiums are so great,” prompting the press secretary to rebuke him: “Does everybody here agree that we can ask questions and answer them? You’re not even letting me answer the question.”

He then proceeded to give his response: “Absolutely. If I did not have employer provided health insurance — as I’m sure you do, unless there is something about Fox I don’t know — then I would absolutely enroll.”

Watch the exchange below, via C-SPAN: