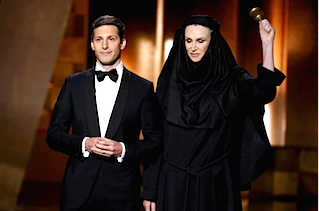 After two solidly-rated years in 2013 (on CBS) and 2014 (on NBC), the 67th annual Primetime Emmy Awards hit a record low in viewership last night on Fox. Despite a positively-reviewed host in Andy Samberg and a history-making night with the first win by an African-American woman, Viola Davis, in the Best Actress in a Drama Series category, the award show drew an average of just 11.9 million viewers, according to early numbers, the lowest total on record.

The Emmys had some stiff competition in the form of Sunday Night Football on NBC, which had close to 23 million viewers. In the advertiser-coveted 18-49 demo, the show scored a 3.6 rating, which was down 14% from last year’s broadcast and paled in comparison to the 8.5 demo rating for the NFL.

When NBC aired the Emmys last year, they did so on a Monday night in late August to avoid that exact situation and drew 15.6 million viewers. Two years ago, CBS’ broadcast did even better with 17.8 million viewers, despite going up against Sunday Night Football.

One other explanation for the decrease in viewers this year could be lack of awards handed out to more traditionally-popular network shows. HBO was the big winner of the night, winning 14 of the 26 awards handed out on Sunday, including Best Drama Series for Game of Thrones and Best Comedy Series for Veep. Comedy Central was a distant second with four awards, three for The Daily Show with Jon Stewart and one for Inside Amy Schumer.

Game of Thrones may be HBO’s most-watched show ever, but in general the premium cable network’s programming does not draw as large of an audience as network shows or even more popular — but less heralded — cable series like The Walking Dead.

Perhaps that’s why HBO used the night to give away free access to its new streaming service, HBO Now:

Lucky for you, @AndySamberg is a very generous #Emmys host. 👀