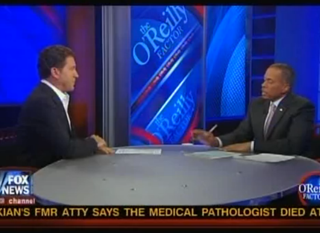 With Bill O’Reilly away, O’Reilly Factor host Juan Williams had quite the heated exchange with FBN’s Follow the Money host Eric Bolling, who was outraged at President Obama’s handling of the economy. Pointing at rising unemployment rates and gas prices as signs that the President was failing woefully to fix the economy, Williams countered with the uptake in stock values, to which Bolling scoffed: “do you think mainstream America cares about the stock market?”

“You’re sneering,” Williams noted, opening the segment with a clip of President Obama talking to workers at a Chrystler plant that brought a wry smile out of Bolling. Bolling lamented that “the taxpayers bailed out the auto industry” and that, no matter what the President had done, “there are 2.5 million jobs lost under Obama.” Williams found the approach unnecessarily harsh to the President, asking in half-jest, “why are you, Eric Bolling, just beating the living daylights out of President Obama?” Williams also noted that “we have had 15 straight months of job growth in this country,” but Bolling replied that the deficit of jobs is still too large and that the small rises in the economy had no impact on the average American.

Williams didn’t pursue the job angle too much further, but instead used stock market data to argue that the economy was on the uptake, as prices were rising. “Throw that out,” Bolling replied hastily. “Who cares? Do you think mainstream America cares about the stock market?” He later elaborated: “Who cares if Goldman Saks is $100 a share?” Instead, Bolling felt the appropriate barometer for economic growth as jobs and gas prices, to which Williams replied, outraged, “You’re blaming him for the $4-5 gallon gas? How is the President responsible for speculators driving up gas prices?” Bolling pointed to several members of the Obama administration as evidence of his involvement in that.