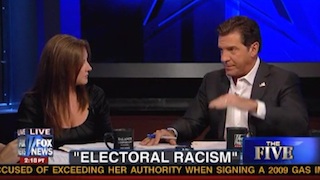 Recently there’s been some debate on the issue of whether voters, particularly white voters, hold black politicians to a higher standard. In a column for The Nation, Prof. Melissa Harris-Perry argued that white voters moving away from President Obama quickly belied a kind of “liberal electoral racism.” Unsurprisingly, this didn’t sit well with anyone on The Five with Eric Bolling arguing that that would make black voters who refused to move away Obama racist as well?

When Bob Beckel fill-in Leslie Marshall compared it to herself voting for a woman because she’s a woman, Bolling argued that then that would be sexist. His argument didn’t get much traction with those around the circle like Dana Perino. However, Perino did say that “racism” is becoming like “global warming” to some people, something that’s used to explain everything.

Oh, Dana. Making fun of climate change believers (even when we live in a time where the season of Fall has seemingly ceased to exist) is supposed to Be Greg and Eric’s job. You’ve got better things to do!

So, what do you all think of Bolling’s argument? Watch the clip from Fox News below: