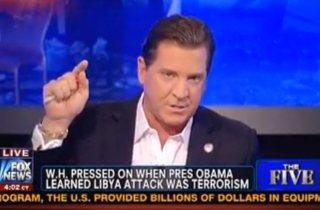 On today’s episode of Fox News’ The Five co-host Eric Bolling had harsh words for White House Press Secretary Jay Carney, accusing the spokesman of lying and the administration of covering up its previous knowledge of the terrorist intentions behind the September assault on the U.S. consulate in Benghazi.

After the show played a clip of ABC reporter Jake Tapper confronting Carney about his claims that the violence was a spontaneous reaction to a YouTube video despite the administration’s claimed knowledge of it being a sophisticated terrorist attack, Bolling expressed his anger:

“Jay Carney is lying to the American people. I will say it unequivocally because the man did say that he blamed the movie. The day after, Hillary Clinton came out and blamed the movie the following day. ‘It was the movie.’ Day five, Ambassador Susan Rice, who is in the State Department under Hillary Clinton said it was the movie. She told everyone. Five days later Jay Carney said it’s the movie. Even on Air Force One he said it’s the movie. My problem here is that the day before the hearing, yesterday, the day before the congressional hearing, the State Department says, ‘By the way, we knew all along it was terrorism. In fact, we knew we had credible evidence all along. We never said it was the movie.’ But they did. Hillary Clinton said it. Ambassador Rice said it.”

“This is a White House coverup,” he alleged. “The State Department says, ‘We’re not part of the coverup. We’ll tell the truth the day before the hearing.’ And even more disturbing: They stonewalled for three weeks so we couldn’t find out exactly what happened. Meanwhile, four americans are dead.”

Liberal host Bob Beckel added that President Obama should address the debacle and say “Look, we just should have laid this thing out. We didn’t do it.” Instead, he said, right now “the hole is getting too deep.”

Co-host Greg Gutfeld then chided the administration for initially blaming the attacks on an anti-Islam YouTube video, saying “They are spinning more tails than a tuxedo factory.”

“What spread the riots? Not just the initial riots, but the riots that came afterwards. You know who spread them?” he asked his colleagues. “The administration did. The administration is responsible for what happened by blaming the video. They appeased a mob, incited the mob to commit more mob violence.”