Fox’s Eric Bolling Has a ‘Kumbaya Moment’ with Jon Stewart 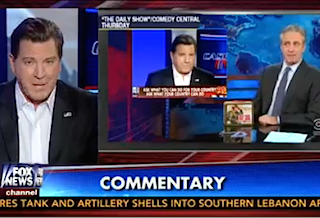 The war of words between The Daily Show’s Jon Stewart and Fox News’ Eric Bolling took on a slightly softer tone Saturday morning when Bolling closed out his weekly Cashin’ In show by proposing a “kumbaya moment” with his frequent nemesis.

The latest feud between these two started almost two weeks ago when Stewart went after Bolling and other Fox hosts for their bizarre obsession with Americans who use food stamps to buy fresh seafood, or as he jokingly called it, “the Mercedes of food.”

Last Saturday, Bolling decided to “school” the Daily Show host, challenging him to a debate on the issue and calling him a “dummy.” This clearly only inflamed Stewart’s passion, who came back at Bolling this past week, slamming him for his “hypocrisy” when it comes to government handouts. “Exploiting government largess, while morally reprehensible and corrupting for an individual is a-ok for corporations,” he said, summing up his idea of the Fox party line.

“Here’s the thing,” Bolling said at the end of his show today, “the funny man agrees America has a problem.”

“So Jon, we have a kumbaya moment here,” he continued. “We should be fighting all waste and abuse in addition to food stamp fraud, right?” He highlighted “the nearly $20 billion in medicaid, waste and fraud, $60 billion in medicare and $7 billion in social security” as other examples of where the government should cut back its spending.

“Bottom line: waste, fraud and abuse is rampant in a bloated government set on handing out other people’s money,” Bolling concluded, putting forth a sentiment about which Stewart may not quite agree. “By the way, Johnny boy, we’ll give you an ‘E’ for effort.”

And watch Stewart’s most recent segment on the issue in two parts below, via Comedy Central: