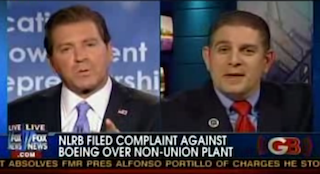 Last month, following Glenn Beck’s announcement that he would soon be leaving Fox News and then took a brief vacation, hosting duties fell to Andrew Napolitano and then Eric Bolling spent some time as guest host. At the time, our own Frances Martel chose a clip of Bolling getting into “a fiery debate” with Lansing, Michigan Mayor Virg Bernero as a good sample of what the Fox Business host’s version of a 5pm show would be like were he to take over permanently. Well, a few weeks later, Beck’s out again (partying it up in Israel), Napolitano got his turn yesterday, and so it was Bolling’s chance today and he, again, fought with Bernero for a few minutes about unions. Fortunately, this combination still makes for some good, raised voice television.

The debate this time was on the “Battle Over Boeing” that’s been brewing in South Carolina. In summary, the National Labor Relations Board has filed a complaint with Boeing after it built a plant in South Carolina to build 787 airplanes. Their claim is that the choice to build there, in a right-to-work state, is a means of retaliation against Washington state union workers who went on strike in 2008. Meanwhile, Republicans like South Carolina Gov. Nikki Haley have been demanding a comment from President Obama on the complaint since the new plant would be a boon for her state.

Anyway, Bolling and Bernero took their familiar roles with the Mayor siding with the unions and the host defending free enterprise. The two old sparring partners got their good licks in. Bernero told Bolling that, were Fox to treat him the way Boeing does their employees, he’d “probably switch over to MSNBC” (how much you wanna bet he’d been saving that quip up since the two last fought?). Bolling, meanwhile, asked the Mayor how his union-loving ways were working out over in Michigan (ouch).

The volume level was raised and continued like that all the way through the next segment of the show as representatives from American Islamic Forum for Democracy and CAIR practically blew a gasket screaming at each other.

So, if Bolling is the guy to take over when Beck leaves (they only need to remove half of the big “GB” insignias all over the set!), we can see what we’re getting. There won’t be any lengthy, twisting monologues any more, but things sure won’t be boring either.