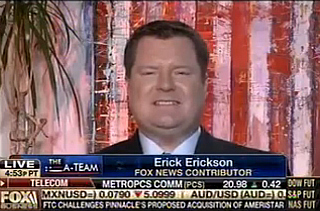 On Tuesday evening, Fox contributor Erick Erickson responded to Greta Van Susteren‘s blog post calling him a “jerk” with a blog post of his own.

In a RedState post, Erickson gave thanks to Van Susteren for turning the country’s attention to “abortion lover” and Texas gubernatorial candidate Wendy Davis, by way of attacking him.

Van Susteren was incensed by several of Erickson’s tweets referring to Davis as “Abortion Barbie” and using condescending language towards the female lawmaker. “I don’t care how much you disagree or agree with Texas’ Wendy Davis, you have to agree that this guy, Erick Erickson, is a real jerk and is really lousy at being a spokesperson for his views,” she wrote.

In response, Erickson offered his “sincere thanks”:

I appreciate Greta focusing on my tweets and find it instructive she chose specifically to not make it about Wendy Davis. Wendy Davis is a one issue wonder heralded by the press because she is a high priestess of the secular religion’s sacred sacrament — slaughtering children on the altar of Moloch. That Greta Van Susteren is offended by me, thinks me creepy and a jerk, and thinks I should not be listened to is of no harm or consequence to me.

Instead, he said, Van Susteren helped bring even more attention to his criticism of Davis:

Wendy Davis believes it is perfectly acceptable to crack open a child’s skull, inject her cranium with saline, vacuum out her brains, then tear her limb from limb unstitching her from her mother’s womb even though a minute, an hour, a day, a week, or a month later she could survive outside the womb. Wendy Davis has staked her career on the right to chop a child to bits, no matter how viable the child is. The media prefers to ignore that to which Wendy Davis staked her career. They’d prefer to focus on her, as Vogue described her, “Barbie looks” and pink sneakers.

I have helped define Wendy Davis by a moniker that sticks, describes, and makes her the butt of jokes, while drawing out the shrill hysterics of her supporters. And there’d be more supporters of hers except for her and her supporters declaring open season on people under 40 weeks of age.

Thank you Greta for putting this issue in the spotlight. I will never win the admiration of affection of the secular set, kid killers, and their supporters — and abortion is killing children. If I was getting praise from them, I’d have to reconsider my priorities. There will always be those who stand with Wendy. But there will be plenty, in the din of campaign rhetoric, who hear “Abortion Barbie” and dig into caricature to find the terribly truth of a one note media created wonder. That someone is offended by me, thinks me creepy, or thinks me a jerk is fine with me as it continues to force them to talk about Wendy Davis, defender of the right to tear children apart.

Just in case you didn’t get it the first time: Erick Erickson is perfectly okay being called a jerk, so long as he’s getting attention for the issues he cares about most.