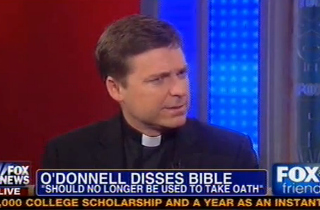 After MSNBC host Lawrence O’Donnell suggested last week that President Obama should discontinue the “absurdest” tradition of using the Bible at presidential inaugurations, Fox News religion analyst Father Jonathan Morris took to Fox & Friends Weekend to fire back at the progressive for stoking the flames of “intolerance” for public religious expression.

Morris continued to point the finger for this “wave” at “activists” like O’Donnell “who would like to wipe the name and voice of God not only from our public conscious, but from the public square.”

Co-host Alisyn Camerota then clarified that O’Donnell meant that because Obama doesn’t believe every word of the Bible — as many Americans don’t — it makes it “disingenuous” to use it at such a momentous occasion.

“It’s like saying because we don’t practice all Ten Commandments, let’s take them down from the courtroom,” Father Morris replied. “Get rid of the Bible? Get rid of any prayer in the inauguration, right? We should totally take “In God We Trust” off the dollar bill. We should absolutely get rid of any expression whatsoever of religion, if we believe that the true meaning of separation of church and state means that God stays within the walls of a church. And that’s what these activists are doing.”

“We should also take the mention of God out of our Constitution. ‘In God We Trust,’ really?” Morris continued. The word “God” does not actually appear in the text of the United States Constitution, so he must’ve been mistakenly referring to the currency motto.

The Father went on to praise Obama for using two Bibles at this upcoming inauguration, but blasted American culture for “ripping the pages out of” the Bible by selectively believing in its passages. “It’s like a tabernacle with no eucharist, like a church without pews, worship without any liturgy whatsoever. That’s what we’re doing. We’re emptying all of these good things of their meaning and when we do, when we empty them, that topples.”