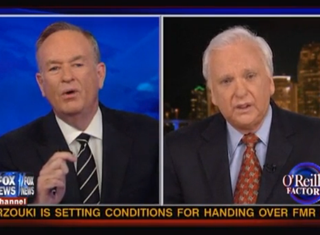 With the Iowa caucus less than 24 hours away, there is still some hesitation in the media that the caucus, not being an actual election and being somewhere in the Midwest, isn’t entirely representative of the nation. On tonight’s O’Reilly Factor, media critic Bernard Goldberg took on precisely this claim from Andrea Mitchell, suggesting that it was only acceptable in the mainstream media to say Iowa wasn’t representative of the nation because it was white. “We’re not going to hear that South Carolina… is too black,” he argued.

Goldberg argued that he did not quite understand what “too white” means, other than to mean that it may be “more white” than the national average. “Every four years we get the same song and dance from the Andrea Mitchells of the mainstream media,” Goldberg griped, that Iowa was too white and rural to make a difference, that they were “covering voters who aren’t representative of any other Americans.” If they really believed it, Goldberg suggested, “here’s some free advice: don’t go!”

He noted that this was part of the bias of large, urban liberal media enterprises, but that it was not only the fact that Iowa was rural that permitted them to question the legitimacy of it as a litmus test for the nation. “We’re not going to hear that South Carolina… is too black,” Goldberg commented, despite the fact that “statistically there are more blacks” in South Carolina than the national average.”

O’Reilly then countered that the fallacy with Mitchell’s argument was not that Iowa was representative, but the “perception that comes out of a victory or defeat. Same thing in New Hampshire.” Goldberg agreed, adding that he was frustrated by the “non-stop horserace coverage” and, while he loved the “cotton candy” coverage and didn’t want to be a “schoolmarm” about it, he found something particularly unhealthy about the fact that policy is barely discussed in the media.

The segment concluded with a mention of MSNBC, which Goldberg argued would not have “journalists” covering the debate, but O’Reilly had some charitable words for the networking: “they’ve toned down the personal attacks over there, so I don’t have any beef with them.”