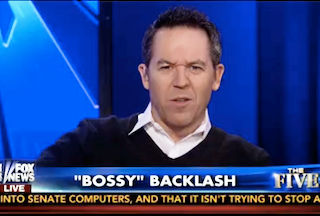 , enlisted Beyoncé, Jennifer Garner, Condoleezza Rice and more for a new campaign this week the ban the word “bossy.” On Fox News’ The Five Tuesday, Greg Gutfeld railed against the PSA, turning around and calling the women in it “bossy” for demanding that a word be “banned.”

“They say bossy is mainly applied to girls to discourage them from leadership roles,” Gutfeld said, “but when a woman demands that a word be banned, aren’t they proving the point? They’re bossy!” He suggested it would be better to teach young girls to say, “Damn right, I’m bossy, now carry my books home from school.”

“Here’s a thought,” he continued, “instead of ragging on words, why not tell girls to respect their bodies? Don’t take topless selfies, get regrettable tattoos or hang out with thugs. If pop stars actually addressed the toxicity of instant gratification, that would be something. Now, I’m being bossy.”

Gutfeld’s co-host Dana Perino pushed back against his point, saying the word causes young women to step back instead of “lean in,” as Sandberg advises. “Bossy turns into the other ‘b-word’ later on in your career.”

“This is a stupid campaign, but it’s a relevant debate because more women are making more money, more women are in positions of power, and so that’s why I think the discussion is somewhat relevant,” Andrea Tantaros said before adding, “But if women are worried about what people are calling them, maybe they shouldn’t be in charge.”

And watch the full PSA below: