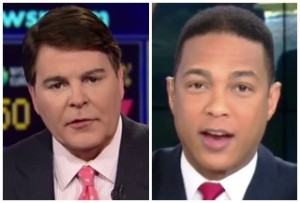 (UPDATE BELOW) Fox News anchor Gregg Jarrett went after CNN’s Don Lemon on Saturday over his commentary on the Michael Dunn “loud music” murder trial, and he doubled down on his criticisms Monday, both on Fox News and Fox News Radio, calling Lemon “the Al Sharpton of CNN.”

Lemon responded to Jarrett’s tweeting by tweeting back, “Mind your business, old man.” Jarrett told Fox News Radio’s John Gibson that he may be an old man, but Lemon shouldn’t look down on that, because “I bring to the table a lot of experience that he utterly lacks,” suggesting Lemon could “use a measure of maturity.”

He concluded, “I think he’s the Al Sharpton on CNN.”

Later in the day, Jarrett continued slamming Lemon during an appearance with Megyn Kelly. He said Lemon “set aside all measure of objectivity and he acted on-air as judge, jury, and executioner.” It “incensed” him, Jarrett added, that Lemon “had the audacity to claim, on-air, that he knows better than these jurors.”

He suggested if Lemon wants a forum to share his opinions on legal matters, he should “have a talk show” instead.

Listen to the audio below, via the John Gibson Show:

And you can watch Jarrett’s Kelly File appearance below, via Fox News:

UPDATE: During an appearance on CNN Monday night, Lemon took a veiled swipe at Jarrett, vaguely referencing his tweet calling Jarrett an “old man” to explain when he’s talking about “old white guys in the media,” he’s talking about “people who have an old mentality.”