Fox’s Greta, The Five Rip Zimmerman Prosecution: ‘Does The Defense Even Need To Put Up A Case At This Point?’ 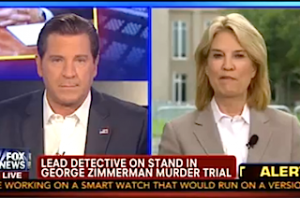 Fox News’ Greta Van Susteren joined The Five Monday afternoon live via satellite from Sanford, Florida where she is closely following the George Zimmerman murder trial. Catching the hosts up on the latest testimony, including audio and video of Zimmerman himself explaining what happened the night he shot Trayvon Martin, Van Susteren said from her point of view, the prosecution could be in trouble.

Van Susteren did reveal “the first good thing to happen to the prosecution in days,” which is that an expert said the only people who could tell if it is Trayvon Martin’s voice on a 911 call audio recording from the night he was killed is Martin’s family. Because of this, she said she expects that we will hear testimony from Martin’s mother soon, who “will say that that is her boy.”

On the testimony from Zimmerman, in which he lays out exactly how he “tried to defend” himself from Martin, Van Susteren said “this is bingo for the defense.” You have the defendant describing his side of the story without getting cross-examined from the prosecution, and of course Martin is not around to tell his side of the story.

“Sounds like all of the prosecution witnesses are falling on the side of the defense,” Eric Bolling said after hearing Van Susteren’s report. “Does the defense even need to put a case up at this point?”

“It is fortuitous for the defense,” Kimberly Guilfoyle added. “They don’t have to expose the client to cross examination. You had a number of witnesses very strong for the defense.” Later, she said that after watching the proceedings today, “if I had to blink, rub my eyes, I would think that they were in the defense case, that the prosecution already rested.”

Van Susteren revealed that the conversation among the media reporters sitting in the courtroom today was along the lines of, “has the prosecution team joined the defense team? That’s the cynicism. But remember, we’re only in the second week, a lot more could happen.”

Turning to the substance of the case, Bob Beckel asked Van Susteren why there hasn’t been more focus on the fact that a 911 operator had told Zimmerman to stop following Martin before the subsequent fight and shooting. It still baffles me that he was told to not pursue this kid in no uncertain terms,” Beckel said, asking, “does that not tell you he was not after this kid in a malicious way?”

Dana Perino asked if Van Susteren got the sense that the jury is aware of the massive media attention the trial is getting. She said she thought they did not realize the enormity of it. Greg Gutfeld wondered why the jury needs to be sequestered when the entire trial is being shown on TV. She pointed out that it’s jess about what the jury tells the rest of the world than what the rest of the world tells the jury. “We poison them. Absolutely not,” she said. “Are you kidding? Do you want a juror talking to Greg Gutfeld?”