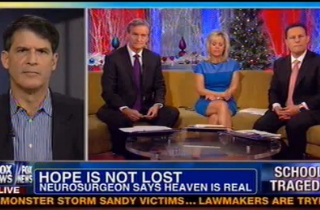 Fox & Friends co-host Gretchen Carlson broke into tears this morning while asking the show’s guest if the children killed last week at Sandy Hook Elementary School will remember the shootings while in heaven.

The guest was neurosurgeon Dr. Eben Alexander, author of Proof of Heaven, which details his own near-death experience in which he was brain-dead for a week and saw what he calls “heaven.” He came on the Fox morning show to offer comfort to the victims’ families in the form of reassurance that their children’s souls are being cared for in heaven.

“For me it’s become very, very clear that that entire realm and the eternity of our souls is very much a part of all reality,” he explained to the hosts. “And that is something that I want to offer to them … that belief can offer comfort and they can know that those precious souls are cherished and cared for right now.”

After he added that he hopes to provide relief for some parents in relaying his own experiences, Carlson began to break down crying as she asked: ”Will these children forget, when they’re in heaven, what happened to them?”

Dr. Alexander responded: “They will know what happened, but they will not feel the pain. They will feel the love and cherishing of being back there. And they will know that they changed this world.”

Co-host Brian Kilmeade then asked the doctor: “Where is the shooter?”

“The shooter is in a place of reviewing his own life,” Dr. Alexander replied. “It’s what’s called a life review in the whole near-death literature.” He explained that “life review” constitutes “re-living all the events of one’s life and reliving the pain and suffering that we’ve handed out to others, but from their point of view.”