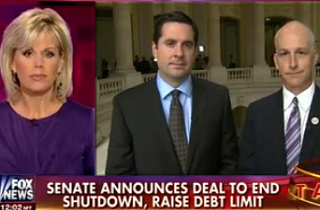 On Fox this afternoon, Gretchen Carlson grilled two congressmen over whether the proposal to end the shutdown and raise the debt ceiling will pass through the House of Representatives. After they admitted that this whole ordeal could’ve been dealt with earlier in the month, Carlson asked whether this is indicative of what Americans “hate” about members of Congress.

When asked whether the bill will pass the House, both Reps. Devin Nunes (R-CA) and Adam Smith (D-WA) answered in the affirmative. The latter, however, added that “The shame of it is, this is something we could have done back in the beginning of October.”

That prompted Carlson to ask her guests: “Isn’t this what Americans hate, quite frankly, about you guys, members of Congress? That this is something that could have been done long ago and here we are again?”

“It’s difficult,” Republican Nunes replied. “I understand why the American people are upset, but the bottom line is in order to make cuts it’s hard for members to pass that vote. I think Republicans made a mistake by thinking that Obamacare was going to be so unpopular that in shutting down the government we would gain something.”

Democratic Rep. Smith stepped in, adding that “There is no question that the Affordable Care Act could be improved. But the debate, unfortunately, wasn’t about how to improve it, it was about how to kill it.” He continued on to suggest the same pattern exists in the debate over the federal deficit. “The debate is that the Republicans continue to insist no new revenue, period,” he asserted. period. “And that is the problem.”

“This is what Americans get so frustrated with,” Carlson interjected. “Again, we have this kicking the can down the road mentality. You have the time to create a budget committee? Really? Really? Because didn’t we just do this with Simpson-Bowles two years ago?”

When Smith pointed out that the country itself is divided on budgetary questions, Carlson shot back: “The President of the United States looked at that Simpson-Bowles report and he punted. He punted!”

“To be fair here,” Nunes clarified, “so that you understand what’s happening, this is not a bipartisan commission. This is following the Constitution and having the budget committees meet in a conference as they are supposed to.”

“I get it all,” Carlson fired back, “but the Senate hasn’t passed a budget in how many years?”

“They passed one this year, as a matter of fact,” Smith declared.