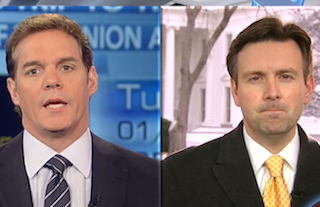 When Earnest said the president will explain his strategy to keep the country safe and that one of the biggest threats facing America and its interests around the globe are “extremists across the globe who in the name of Islam try to carry out acts of violence.”

“So, ‘in the name of Islam,’ but not Islamic extremism,” Hemmer replied. “The White House, this president, is not prepared to go there, correct?”

Earnest said Obama would make it clear that “the world is not at war with Islam, the world is at war with individuals who in the name of Islam try to carry out acts of violence.” Because of that stance, he said the U.S. has been successful at getting majority-Muslim countries to help combat this violence alongside our military.

In the days following the terror attacks on Charlie Hebdo in Paris, Earnest said it would not be accurate to call the attackers “radical Islamists.”

So, as we stand now, you won’t be hearing the president say “radical Islamists” or “Islamist extremists” during tonight’s speech. But something along the lines of “extremists across the globe who in the name of Islam try to carry out acts of violence” would be a good bet.