Fox’s Howard Kurtz: Huckabee’s Farewell ‘Kind of Like an Infomercial’ 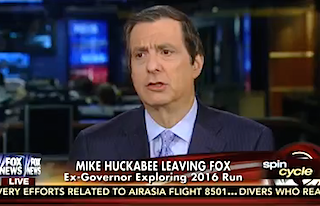 Hosting a media show for Fox News means that every once and a while Howard Kurtz has to cover, and even criticize, his own network. And there were shades of those critical sentiments this Sunday when the MediaBuzz host asked his guests if Mike Huckabee’s farewell show on Saturday couldn’t be considered “kind of like an infomercial” for his likely 2016 presidential run.

Huckabee’s departure from Fox was the top story on MediaBuzz this week and as one of his guests explained, “There is a rule: You can’t run for president and have a show on a network that is going to be fair and balanced and he had to go.”

But it was the content of Huckabee’s final show that seemed to run Kurtz the wrong way. “Huckabee talked about God… not putting him on this Earth just to make money and he talked about learning to govern during his decade in Little Rock,” Kurtz said. “Should Huckabee have been able to use this Fox show to make that announcement? Is that kind of like an infomercial?”

“It is!” The Washington Examiner’s Susan Ferrechio replied, noting that Huckabee has been making his case to his millions of viewers “week after week” and saying, “There is a question about whether this is really campaigning on the air.”

But Fox’s Chris Stirewalt told Kurtz he was reading too much into the whole thing, insisting “there is a not a secret agenda” at Fox News and that the channel’s political team is “doing it the right way.”