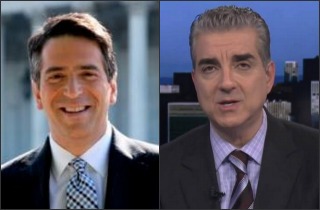 As we reported on Wednesday evening, Fox News reporter James Rosen came to defense of State Department spokeswoman Marie Harf, who has been attacked by conservatives for her various statements about administration policy. Her most infamous moment came when she told MSNBC that the White House believes there are many factors to why young people would join up with jihadist forces, including economic recession and lack of job opportunities.

Despite her point being one previously echoed by President George W. Bush, much of the resultant “abuse” aimed at Harf, Rosen told Fox colleague Megyn Kelly, “has been sexist in nature, juvenile in nature.”

Apparently, that opinion strayed too far off the reservation for conservative Newsmax TV host Steve Malzberg, who heard Rosen’s words and proceeded to level this charge:

But Malzberg pressed on:

And so Rosen tried to address the attack in under 140 characters:

@SteveMTalk Not really; I showed how some of her wounds were self-inflicted. But at least you're eschewing "schoolboy crush"-level analysis.

Malzberg then backed off, claiming he was just razzing the Fox reporter, trying to create a “lighter momment” [sic]:

@JamesRosenFNC James, I have always had the greatest respect for your work and still do. It was intended as a "lighter momment"

In a related Twitter thread, Rosen also fended off charges that Fox News is somehow to the left of MSNBC because of Rosen’s supportive words for Harf:

@laurarubin7 @SteveMTalk Yes, Laura, what I have to say, on just about anything, is indistinguishable from what Al Sharpton has to say.