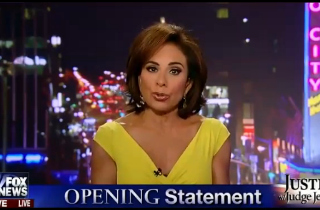 President Barack Obama has intentionally allowed the border crisis to get this far as a way to shift demographics in favor of the Democrats. At least that’s the latest theory peddled by Fox News host Judge Jeanine Pirro.

During the opening monologue of her Saturday evening show, Pirro reiterated her long-standing claim that the ongoing immigration crisis involving thousands of migrant children stuck in facilities near the Mexican border was purposely engineered by the White House.

Pirro, the former GOP nominee for New York State Attorney General in 2006, suggested that Obama has known about this latest “deluge” of immigrant Central American children for at least two years, and has knowingly covered it up:

Over the past two years, multiple warning signs were conveyed to the Obama administration. Studies they funded concerning the coming surge and Customs and Border Patrol as well as ICE agents were ringing alarm bells. The White House was involved, two years ago, in efforts to care for these kids when they negotiated the temporary shelter at Lackland Air Force Base in Texas. So why, you say, would the Obama administration not prepare and plan and warn us two years ago? Why?

She then answered her own question by playing a week-old clip of her first positing the conspiracy theory:

I draw but one conclusion: Barack Obama is intentionally using the immigration crisis as an excuse to change the demographics and ultimately the electorate of this nation.

Now back to this weekend, she expanded upon that theory, adding that this was a “calculated decision” by the White House because “if the president were to tell us this surge was coming indeed already started it would be far more difficult to pass comprehensive immigration reform, wouldn’t it?”