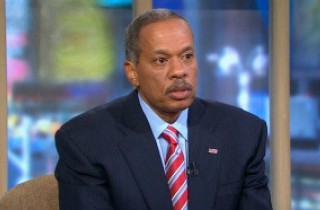 The grand jury decision on whether to indict Officer Darren Wilson for the shooting death of 18-year-old Michael Brown could come at any moment this week, and so Williams took to his FoxNews.com column this weekend to preemptively caution his network’s rivals to handle the story with care:

Now, it is true that television networks profit from coverage of riots. So do extremist voices, often from out of town; suddenly people making threats and shouting vile things are in demand for interviews because they are elevated to the status of experts on the black experience. They certainly profit from racial chaos and violence and now they are looking to score again.

Those people looking to get on television and the producers looking for ratings will not be around to repair the damage once the riots tear through town.

Although he steers clear of naming names in print, Williams got a bit more specific during a Monday appearance on John Gibson‘s Fox News Radio show. Expanding upon his column, Williams lamented a certain TV personality who would enjoy swooping down into Ferguson to portray himself as “the voice of the people.” It doesn’t take much to guess that the Fox analyst is perhaps taking shots at Al Sharpton, among other possible personalities on rival networks like MSNBC and CNN.

In the print edition of his commentary, Williams jabbed at the many reporters who had negative encounters with Ferguson police while covering the August protests there:

Throughout this sad affair the mainstream media’s coverage has been self-involved – pitting reporters against police and celebrating people who came from far outside Ferguson to get their moment of TV attention.

It is the job of the media to report the news and separate the hysteria from the facts.

Now newspapers and broadcast outlets are effectively egging on the agitators and tacitly nudging the protesters towards riots by creating an expectation of riots.

And he concluded with a plea for the residents:

If there is no indictment of the police officer who shot and killed Michael Brown, please, please do not engage in violent riots. Instead, channel your passion, your disappointment and your anger towards something constructive rather destructive.

Listen to the radio interview below, via Fox: