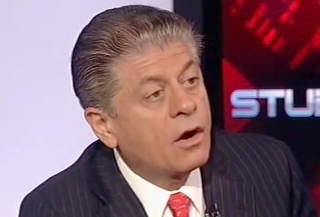 In an op-ed for The Washington Times, Fox News senior judicial analyst Judge Andrew Napolitano lashed out at Pope Francis for focusing his attention on “youth unemployment” as opposed to issues relating to life and death.

To be sure, youth unemployment is a serious problem,” the judge wrote. “Is it the worst problem in the world, though? Is it a problem for the Roman Catholic Church? Is it something the pope is competent to comment upon or to resolve?”

Napolitano, a self-described “traditionalist Roman Catholic who laments the post-Vatican II watering down of sacred traditions,” took particular issue with the economic views expressed in the pope’s recent encyclical, titled “Joy of the Gospel”:

[He] attacks free-market capitalism because it takes too long for the poor to get rich. “They are still waiting,” the pope wrote. Without capitalism, which rewards hard work and sacrifice, they will wait forever. No economic system in history has alleviated more poverty, generated more opportunity and helped more formerly poor people become rich than capitalism. The essence of capitalism goes to the core of Catholic teaching: the personal freedom of every person. Capitalism is freedom to risk, freedom to work, freedom to save, freedom to retain the fruits of one’s labors, freedom to own property and freedom to give to charity.

Napolitano continued on to suggest that traditional Catholic doctrine places an emphasis on charity, but not by government force, for, he wrote, “It is impossible to be charitable with someone else’s money. That’s theft, not charity.”

“If you give until it hurts, freely and out of love, and seek nothing temporal in return, you have built up treasure in Heaven,” he wrote. “However, if the government takes from you and redistributes your wealth to those whom the government has decided to benefit — rich and poor alike — what merit is there in that for you?”

Slamming the pope’s views as slightly “Marxist,” Napolitano insists Francis must know that “failed systems” like socialism “lead to ashes, not wealth.” The judge also pointed to a 1931 encyclical, amid European turmoil, in which Pope Pius XI wrote: “[N]o one can be at the same time a sincere Catholic and a true Socialist.”

“What shall we do about the pope and economics?” Napolitano asked in conclusion. “We should pray for his faith and understanding and for a return to orthodoxy. That means the Holy Mother Church under the Vicar of Christ — saving souls, not pocketbooks.”