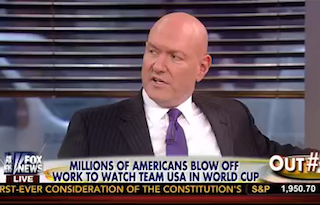 While most Americans were shirking their responsibilities to enjoy the USA vs. Germany World Cup match Thursday afternoon, Fox News’ resident psychoanalyst Dr. Keith Ablow was doing his best to throw cold water on the proceedings by calling the event a “distraction” from the important issues to which Americans should be paying attention.

“I’m psyched,” Outnumbered co-host Kimberly Guilfoyle said Thursday. “I love soccer and I am excited that USA is getting on board with the worldwide soccer craze.”

That’s when Ablow jumped in to rain on her parade, saying “I am suspect.” Then he delivered this nugget of punditry:

“At a time when there’s so many national issues and international issues of such prominence, I am a little suspicious of yet another bread and circus routine. Let’s roll out the marijuana, pull back the laws and get people more crazy about yet another entertainment event. This is to distract people. This is like Rome. I can see why Obama would love the World Cup.”

The four women on the panel immediately started jumping on Ablow with cries of “What’s wrong with that?” and “You have a very dark worldview.”

“What are you talking about?” Guilfoyle responded. “This is encouraging for kids to get out and play sports!”

“Gosh, they set these schedules years ago, its not like they lined it up with what’s going on in the current events of the world,” Harris Faulkner added.

“Dr. Keith needs to take a chill pill,” Guilfoyle concluded, before presumably walking off the set and watching the rest of the USA vs. Germany match.