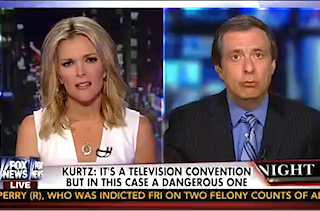 MediaBuzz host Howard Kurtz joined Fox News’ Megyn Kelly Monday night and the two spent a few minutes going after “liberal outlets” like The Huffington Post and MSNBC for what Kurtz called a “lynch mob mentality” in their coverage of the Michael Brown shooting and subsequent protests in Ferguson, Missouri.

“I’ll tell you something else that I’m concerned about and that is some liberal outlets creating almost a lynch mob mentality around this,” Kurtz said. As an example, he cited the “screaming banner headline” shown below that appeared on The Huffington Post earlier today:

“I just think when you cross that line into becoming an advocate and demanding somebody be prosecuted before the facts are in, while the investigation’s going on, you’re grandstanding, you’re trying to keep the story alive and I really think it’s troubling,” Kurtz added.

That comment prompted Kelly to bring up MSNBC host Al Sharpton, who she said was “pouring fuel on this fire.” Noting that Sharpton called the Ferguson police department’s release of surveillance video showing Michael Brown’s alleged robbery the most “offensive and insulting” he’s ever seen, Kelly asked, “Al Sharpton has never seen something so offensive and insulting as that? How about the fake rape allegations that we dealt with back in the day?”

Kurtz, who said he does not think Sharpton is “entitled” to be both activist and television commentator, differed remarkably from CNN’s Brian Stelter, who took over his show Reliable Sources this year. Here’s what he had to say about that issue this week: