Fox’s Kennedy to Keith Ablow: ‘Don’t You Dare Put Words in My Mouth or I’ll Smack You Down!’
video

Fox’s Kennedy to Keith Ablow: ‘Don’t You Dare Put Words in My Mouth or I’ll Smack You Down!’ 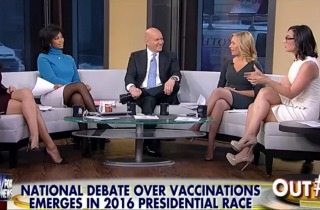 From the moment Outnumbered began Tuesday afternoon, viewers were made aware of tension between Kennedy and Keith Ablow. That time-bomb exploded rather quickly, with the former becoming frustrated at the latter putting words in her mouth (and probably also because his punditry is the equivalent of one long shit-eating grin).

At the top of the show, Ablow immediately pointed out that Kennedy “grins at me in a wry way like she’s just spoiling to have a pointed discussion with me.” In the past, Kennedy has called out Ablow for all kinds of nonsense: She was at the couch when he went on his “Michelle Obama could stand to lose a few pounds” rant; and her previous FBN show tore into him as “tacky” and “classless.”

While Kennedy is by no means anti-vaccination, she did take issue with this particular nugget from the Fox doc: “The government has to have a law for all people to do when they’re grouped in public places and one of them is protect children by vaccinating your children.”

“Your logic that the government has to control everything we do when we’re in a group setting is totally flawed,” she told him, “and I can give you several examples when we’re all together and the government doesn’t need to give oversight.”

Ablow became defensive and fired back: “We’ll play that back, we’ll check your hearing. One or the other is definitely off, because, wow, talk about not listening. I’m a listening professional.”

It’s also very dangerous not to vaccinate your children and a lot of people have been making the point, the parents — the rational parents who choose to vaccinate their kids, which they should — they ought to make that choice. You know, vaccines do work and I understand people are scared about putting chemicals in their children. I totally understand that, but they had been proven safe in study after study. That doesn’t mean the government has to tell you what to do in every single situation.

Ablow dismissively responded: “Kennedy doesn’t like metal detectors at airports. She feels that’s offensive. The governent should not control anything that people do.”

“Don’t put words in my mouth,” she replied. “I will smack you down to Chinatown. I’m going to ignore this Lex Luther here.”