Fox’s Kirsten Powers: Obama Nominating Susan Rice For Secretary Of State ‘Could Be His Undoing’
video

Fox’s Kirsten Powers: Obama Nominating Susan Rice For Secretary Of State ‘Could Be His Undoing’ 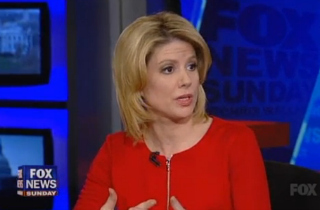 During a Fox News Sunday discussion on a potential Obama nomination of U.N. Ambassador Susan Rice as a replacement for Secretary of State Hillary Clinton, Fox News liberal commentator Kirsten Powers said that a Rice selection could be Obama’s “undoing.”

Neoconservative commentator Bill Kristol suggested Rice could be a decent selection in his mind because, when compared with Sen. John Kerry‘s wishy-washy stance on getting involved in international conflicts, the U.N. Ambassador tends to lean a bit more in favor of the type of international interventionism that Kristol desires.

Asked directly whether she believes President Barack Obama will select Rice to replace Clinton, Powers said bluntly: “I don’t know, though I think if he does, that kind of arrogance — which is what I think it would be — could be his undoing.”

She explained further: “If she is put under oath and forced to go through and answer all these questions about Benghazi, I think it’s going to put the administration in a really bad position.”

Powers also contested the notion that Rice was ever the frontrunner for Clinton’s position, saying that from “everything I’d heard, it was that she was in the running but it was leaning more towards John Kerry. And then we have this press conference where the president just kind of went off about Susan Rice, and it’s now become almost a sense of pride.”

“You think he cornered himself in that press conference?” host Chris Wallace asked. “Now if he doesn’t name her, he looks like he’s caving?”

“I think he did,” Powers responded. “I don’t know that it was intentional. And I know that he went a little overboard.”

She concluded by reiterating her main point that nominating Rice would be more trouble than it’s worth: “If he wants to send her up on the Hill and put her under oath and have her answer every single question this administration will not answer over Benghazi… go for it.”

In recent months, Powers has been one of the few Democrats to be openly critical of President Obama’s handling of the Benghazi attacks, and recently called his press conference defense of Rice to be “sexist” and “silly.”