Fox’s Kirsten Powers To Panel: Chris Wallace ‘Should Be Proud’ Obama Won’t Go On His Show 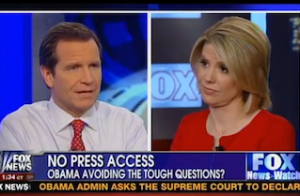 After a week in which a lot of media attention was focused on the White House Press Corps’ lack of access to President Obama‘s golf vacation in Florida, Fox News Watch asked Saturday why the president is shutting out reporters and avoiding “tough questions.”

Jim Pinkerton, contributing editor for The American Conservative magazine, said that Ed Henry‘s message that this was “about transparency” and not about golf, was lost on most of the “mainstream media” because of Henry’s affiliation with Fox. He added, “the mainstream media are so ‘Obamaphilic’ that they just clobbered the White House Press Corps for daring to ask questions.”

Daily Beast columnist Kirsten Powers agreed with POLITICO’s assessment that President Obama is a “puppet master” who “only wants to talk to people who aren’t going to give him tough questions.” For that reason, Powers said Fox News Sunday‘s Chris Wallace “should be be proud that the president won’t go on his show at this point. What it says, is he only goes on shows of people that go easy on him and so that means these other people who call themselves journalists should start asking ‘why is the president so willing to come on my show so often?'”

Radio talk show host Monica Crowley then argued that it’s nothing new for a presidential administration to “loathe the press” and ” freeze out outlets they believe are hostile to it.” But the irony, she said is that “this president and this White House has gotten more favorable coverage and more protection than any other president in recent memory.”

Crowley also found it remarkable that the “press discovered their outrage about being denied access over a golf became with Tiger Woods. Where is their outrage on being blocked access to Benghazi or Fast and Furious?”

The Fox panel seemed to agree that the “mainstream media,” in the case everyone but Fox News, may be finally waking up to the control the Obama White House has held over them for the last four years. While other news outlets may still want to play nice with the president in hopes of getting some highly-coveted access, Fox News seems to have given up hope of ever getting on Obama’s good side and will therefore keep holding his feet to fire as they always have.