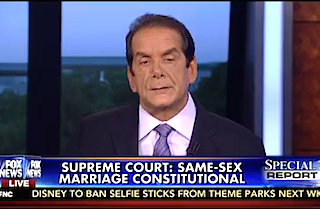 In Fox News contributor Charles Krauthammer’s view, today’s landmark Supreme Court ruling that makes same-sex marriage the law of the land nationwide represents a “huge loss” for democracy as we know it.

Speaking on Fox’s Special Report Friday evening, Krauthammer called the creation by the court of a constitutional right to marriage regardless of gender or sexual orientation an “invention” akin to “the invention of the right to abortion” that came with Roe v. Wade.

“Whatever you believe about the policy for abortion or here for gay rights,” he continued, “the idea that the court should decree that it’s a constitutional right, something that had been hidden in the Constitution for over 100 years and that nobody has ever discerned is simply a way of saying that it has been removed from the democratic arena, it can no longer be debated, all the laws are canceled and we are in a new place.”

To make his point, Krauthammer cited the argument of liberal Justice Ruth Bader Ginsburg, who previously said that the court’s decision to legalize abortion actually prevented the country from uniting behind it because it “took it out of the political arena.”

“That’s exactly what happened today on gay marriage,” he added. “Whatever you think about the policy, it is a huge loss for a democracy.”

Krauthammer’s comments more or less line up with the dissent from Justice Antonin Scalia, who called the decision a “threat to American democracy.”