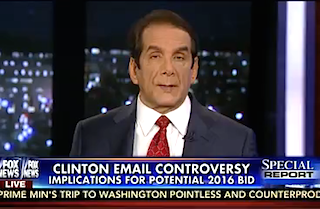 As the details surrounding Hillary Clinton’s use of a personal email address and server during her time as secretary of state continue to emerge, the big question on most pundits’ minds is, what will it mean for her 2016 chances? The general consensus appears to be that it neither deter her from running nor do much damage to her brand. But during a discussion on Fox News’ Special Report with Bret Baier Friday evening, Charles Krauthammer predicted that Sen. Elizabeth Warren (D-MA) could upend that equation.

“Yes, she runs, because the Clintons are undeterred by anything,” Krauthammer said of Clinton’s still-unannounced campaign. But, he added later, “There is one name who would change the game.” He predicted that if Warren announced her candidacy, “There would be a poll out in a week and she would be ahead and everything would change.”

Warren, who has said again and again that she will not be running for president in 2016 — despite an increasingly loud campaign urging her to do so — would likely benefit politically from anything that hurts Clinton.

Last month, the Run Warren Run campaign hyped up a poll that supposedly showed Warren ahead of Clinton in hypothetical primary races in Iowa and New Hampshire. However, the poll’s recipients were first plied with copious positive information about Warren and nothing about the other candidates, making it flawed, to say the least.

Recently, Clinton invited Warren to her Washington, D.C. home for a private meeting described as “cordial and productive” by one Democrat who was briefed on their discussion.